Rumpsch is a trick taking game

Players:  Best with 5 or more, up to 8…dealer rotates clockwise

Deal:  Dealer deals 5 cards to each player and 6 in the kitty, then turns up one card that is trump

Declare: The players in turn, starting to the left of the dealer, declare whether they will play in the hand dealt. If any player declines to play the hand dealt to him and the kitty is available, he must take the kitty, discard one card and play that hand. Thus, the player to the left of the dealer will always have to play. After the kitty has been claimed, the players may choose to play or decline.

Play:  5 tricks are played, beginning with a lead from the first involved player to the left of the dealer. Players must follow suit but need not beat (play a higher suit or trump card). However, every player who takes a trick must then lead a trump card if he has any, hence the Rumpsch mantra—TRUMP AFTER TRICK!!.

Scoring:  The scorecard assigns 3 X’s to each player and the scorer records one strike on each arm of the X and one at the intersection of the X for each trick scored by the player—5 tricks to each X.  The nasty aspect of the game is that if a player chooses to play (or is forced to play, by having to take the kitty) and does not take any tricks, he “bucks” and gets 1 more X that he will have to fill to win.

Winning: The first player to fill all of his X’s wins the game. 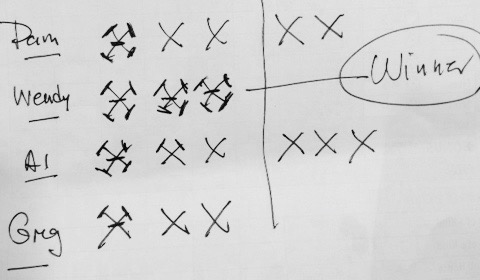 Betting/Prizes:  If played for cash or prizes (oftentimes poultry), set the prize or cash award for the winner.  A second place cash award can be established by requiring each player who has bucked to contribute a set amount for each of his bucks and the total contributed—“buck money”–is awarded to the second place finisher

International rules may vary, but I’m not familiar with them.